We'd Like to Thank You, Herbert Hoover is a song from the stage musical of Annie. It takes place in a Hooverville immediately after the song Tomorrow. After the song is finished being sung, Annie approaches the people living in the Hooverville and learns of their problems. After Annie gives them an optimistic way of looking at their situation, the Hoovervilleites sing the final part of the song, where they say that Annie should have been a politician, before they are interrupted by the arrival of the police, who tear down the Hooverville.

In later productions of the musical, Annie's arrival to the Hooverville and conversation with the people was moved to prior to the song being sung. Because of this, two of the lines were slightly changed and sung by Annie instead, and the final part of the song was removed and changed to regular dialogue (because it now takes place before the song is sung).

The song was cut from all three movie adaptations of the musical.

[SOPHIE]
Today I'm stealing coal for fires
Who knew I could steal?

[MEN]
I used to winter in the tropics

[WOMEN]
I spent my summers at the shore

[FRED]
I used to throw away the paper--

You made us what we are today

Prosperity was 'round the corner
The cozy cottage built for two
In this blue heaven
That you
Gave us
Yes!

We're turning blue!
They offered us Al Smith and Hoover
We paid attention and we chose
Not only did we pay attention
We paid through the nose

In ev'ry pot he said "a chicken"
But Herbert Hoover he forgot
Not only don't we have the chicken
We ain't got the pot!

[WOMEN]
You left behind a grateful nation

[ALL]
So, Herb, our hats are off to you
We're up to here with admiration

[SOPHIE]
Come down and have a little stew

Why don't we stuff you!
We'd like to thank you, Herbert Hoover
For really showing us the way
You dirty rat, you Bureaucrat, you
Made us what we are today
Come and get it, Herb!

(Second part of the song, later cut from the play):

[ALL]
You shoulda been a politician!
Ya really got a way with words!

[FRED]
We shoulda had you on the ballot!

[SOPHIE]
Them other guys is for the birds! 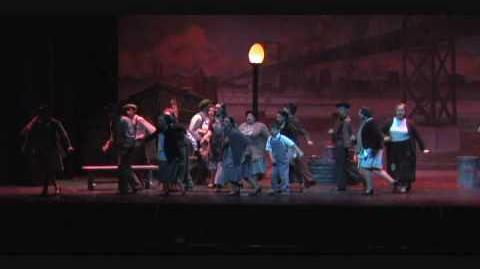 Retrieved from "https://annie.fandom.com/wiki/We%27d_Like_to_Thank_You_Herbert_Hoover?oldid=8934"
Community content is available under CC-BY-SA unless otherwise noted.