Red (in the novelization)
Black (in the film adaptations)

Oh, blow it out your old wazoo

Pepper is a bully and one of the orphans from the Broadway show and film, Annie. In the original version of the stage musical, Pepper is 14 years old, but in later revised versions of the stage musical, she is 12. She was originally the oldest, but in the current version of the Broadway play, two other orphans, Duffy and July, are older than her. She is also the meanest and bossiest orphan especially towards Molly.

Molly: "They're going to do something bad to Annie! Pepper!"
Pepper: "Have you cleaned the can?"
Molly: "Listen to me, I mean it!"
Pepper: "Clean the can!"
Molly: "Duffy, Tessie, somebody!"
Pepper (grabs Molly): "You want a knuckle sandwich?"

Portrayed by Rosanne Sorrentino, Pepper is the oldest orphan. At the beginning of the movie, she is annoyed when Annie comforts Molly after a bad dream. She then goes on to torment Molly, causing Duffy to push her down and start hitting her. When Annie interrupts and scolds them, Pepper tells her to "Blow it out your old wazoo."

During the Hard Knock Life sequence, Pepper sings the lines, "No one cares if you grow or if you shrink" and "Make her drink a mickey-fin". She is seen sweeping, hanging someone on a light fixture, and emptying water on people. Later when Annie hides in the laundry basket, Pepper says she's going to tell Miss Hannigan.

When Annie is caught by a policeman and takes her back to the orphanage, Pepper answers the door. As Miss Hannigan and the policeman are flirting, Pepper says, "Kissy, kissy, kissy!" and makes kissing noises, causing Miss Hannigan to yell at her. Pepper then runs back inside.

Pepper does not like Annie's dog Sandy, claiming that "He smells." During the Sandy sequence, Pepper sings "Champion? You're anything but!" and "Tiger? (*raspberry*) Kittens would frighten him!".

Pepper is later seen waving goodbye to Annie. In the Maybe Reprise, Pepper starts the song singing "Betcha he reads/Betcha she sews."

When Molly overhears Rooster and Lily St. Regis planning to stage as Annie's parents, she tells Pepper, who is reading a magazine and asks if she's cleaned the toilet yet. When Molly insists, Pepper threatens to punch her. When Molly finishes scrubbing, Pepper tells her to do the other one. Molly then grabs a mop and hits Pepper in the face, causing Pepper to fall backward into a shower curtain.

Later when the orphans attempt to rescue Annie, Pepper is grabbed by Lily and forced back inside while Lily kicks her from behind. Just before the closet door closes, Pepper is heard yelling at the other orphans, "Who's rotten idea was this?"

While the orphans are trapped in the closet, Pepper has the idea to climb up the shelf and escape through the vent in the ceiling. She is the first to climb up, and Duffy hands her a mop to bash the vent in. She then helps Duffy climb up after her, and they go onto the roof. As Pepper looks over the edge she looks nervous, saying, "It's a long way down." The orphans then climb down the fire escape with Pepper in the lead.

When the orphans reach Fifth Avenue, Pepper says, "We're never going to make it!" When Duffy points out that they reached Fifth Avenue, Pepper reminds everyone that they have to go all the way to number 987 if they want to get to Mr Warbucks' house. She then helps Molly climb onto Kate's back. Later the orphans sit down, and Pepper announces that they should go back to the orphanage. Molly argues, and Pepper tells her they're never going to get there. The orphans take a vote, with Pepper raising her hand and saying, "All in favour of calling it quits."

When the girls see Sandy in the back of Rooster's car, Pepper tells everyone to keep going. They reach Mr. Warbucks' house, and the orphans look shocked to see Punjab. They go into the house and tell Mr Warbucks about Miss Hannigan's plan.

Pepper is seen in the last scene of the movie wearing new clothes and watching the Fourth of July fireworks with the other orphans.

According to the novelization, Pepper is "the biggest of the orphans, a pug-nosed rapscallion with a face full of freckles and long, tousled hair that was even redder than Annie's."

In the film, Pepper has short brown hair and brown eyes. She is the tallest orphan, although she is similar in height to Kate. During the day she wears a brown skirt, a grey sweater, and brown shoes with brown socks. During the night she wears a grey nightshirt and brown shorts. At the Fourth of July celebration she wears a blue and white dress with a bow in her hair.

Depending on the version of the story, Pepper is either the oldest or second oldest orphan. She is interested in girly things, but she comes across as more boyish than the others. She likes to be in control, and gets angry when people disagree or annoy her. She tries to make others do work for her. She threatens to hurt her friends and insults them. She sometimes play jokes and picks on other younger. But most of the time she is happy and is kind to her fellow orphans. She helps Annie escape, and she plays with Molly during the song "You're never fully dressed without a smile," and she dances with Molly during the 4th of July and holds her up so she can see the fireworks. Her best friend is Kate and they are seen hanging out together. She truly cares about the other orphans, but she doesn't like to show it that often. 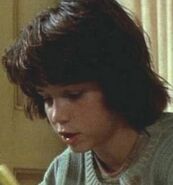 Pepper as a Boylan Sister

Pepper singing
Add a photo to this gallery

Retrieved from "https://annie.fandom.com/wiki/Pepper?oldid=8936"
Community content is available under CC-BY-SA unless otherwise noted.